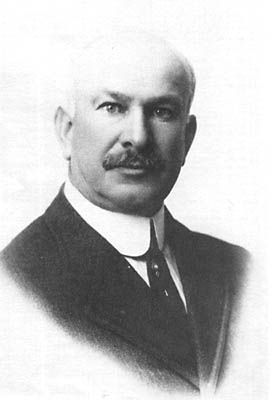 Architect William Sterling Hebbard (1863-1930) is best known in San Diego for his collaboration with Irving J. Gill, which included the Marston House, the State Normal School (predecessor of SDSU), and the restoration of the Mission San Diego de Alcala. However, Hebbard’s earliest work in San Diego was for the San Diego Cable Railway.

After education at Cornell School of Architecture and an apprenticeship with Burnham and Root in Chicago, Hebbard relocated to Los Angeles in 1888. There he worked as a draftsman for William Cuthbertson, whom he joined on sketching trips to the nearby crumbling missions. While in Los Angeles, Hebbard connected with Frank Van Vleck, a former Cornell engineering professor who had just completed construction of the Los Angeles Cable Railway.

When San Diego’s Electric Rapid Transit failed in 1889, owner George Copeland decided to revive the route using cable for power instead of electricity. Van Vleck was hired as Chief Engineer of the newly formed San Diego Cable Railway, and likely invited Hebbard to join him in San Diego.

This post is the first in a series about William Sterling Hebbard’s architecture in San Diego, including the Cable Hotel, Pavilion at the Bluffs, and Castle Dare.

Hebbard’s first commission for the San Diego Cable Railway Company was the power house on Spruce Street between 3rd and 4th. The power house was sited at the head of a canyon where the “town” and “mesa” routes met. It was constructed of brick and featured an arched car entrance and windows, an early architectural example of mission influence.

The main floor, at street level, housed the car barn and engine room, with its driving wheels and winding drums. The top floor, clad in shingles and topped with a pagoda-style hip roof, contained the company offices. The basement level, set into the canyon, housed the steam boilers which connected to a 100-foot-tall brick smokestack, just visible in the photo.

The San Diego Cable Railway began operation on June 7, 1890, carrying passengers from the wharf at the foot of 6th Street, through downtown and up the mesa to Florence Heights, in stylish high-tech cars for only a nickel.

To learn more please continue checking back at www.pangis.com/news