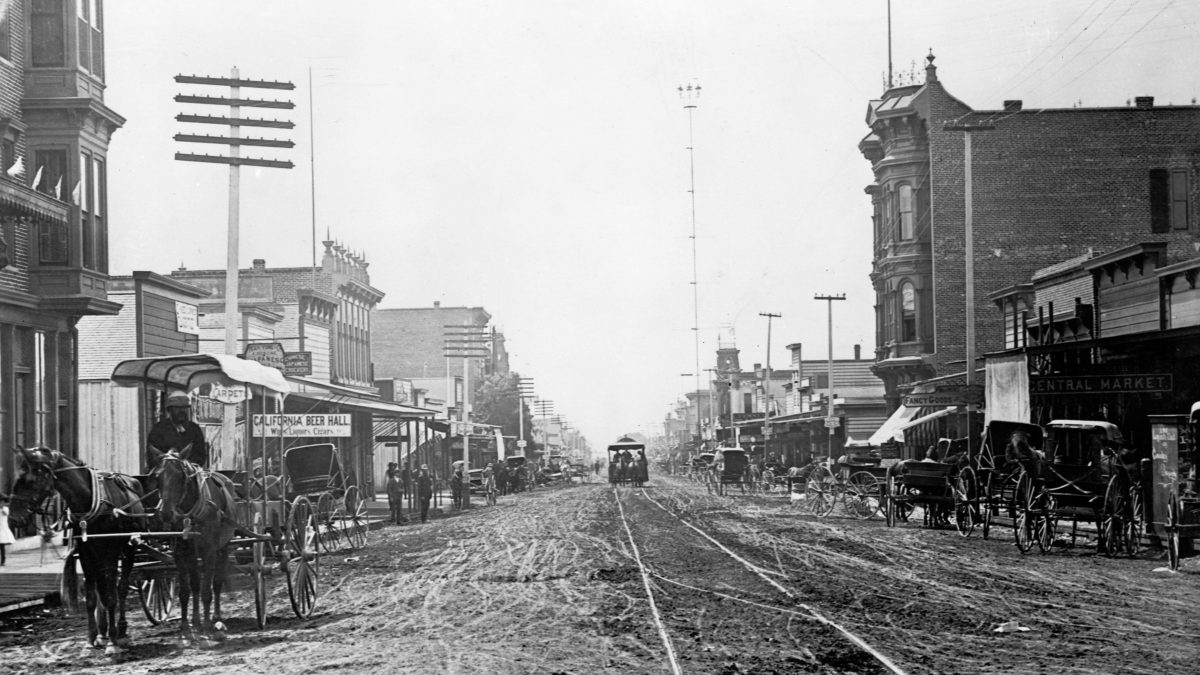 Fifth Avenue in the Gaslamp District is one of San Diego’s most popular destinations for tourists and locals alike. The stretch of Fifth south of Broadway is a mix of shops, restaurants, and office space, much as it was in the late 1800s. This stretch of Fifth is also one of the oldest streetcar routes in San Diego.

The track was first laid along Fifth Avenue in 1886 by the San Diego Streetcar Company, owned by Coronado developers Elisha Babcock and Hampton Story. The San Diego Streetcar Company operated horse-drawn streetcars in the downtown core and surrounding suburbs, starting service on July 3, 1886. The southern terminus of the system was the Pacific Coast Steamship Wharf at 5th and L St, near the National City & Otay and Coronado Railroad depots. From there, the line ran north up 5th to the luxury Florence Hotel in Florence Heights (Bankers Hill). Connecting routes crossed 5th at H Street (Market) serving the Coronado Ferry Terminal and Logan Heights area, and at D Street (Broadway) serving the Santa Fe Railroad Depot and the Golden Hill neighborhood.

The San Diego Streetcar Company was purchased by John D. Spreckels in January 1892 and incorporated into his newly-formed San Diego Electric Railway (SDERy). The track was re-laid to a common gauge and service began September 21, 1892. The Fifth Avenue line was one of the first to be electrified. The entire 16-mile system was converted to electric operation by 1897, retiring all horse-drawn streetcars. As the SDERy expanded, Fifth Avenue served several different trolley routes, including No.1 (Fifth Avenue-Logan Heights), No. 3 (Fifth Avenue), No. 4 (Imperial Avenue), and No. 5 (K Street & Ocean View). The most heavily traveled segment, overlapped by several routes, was between Market Street and Broadway.

Expansion and Fall of the SDERy:

SDERy flourished through the 1920s, expanding to serve Mission Beach and La Jolla, but saw reduced ridership as automobiles became less expensive and more popular. After a brief resurgence during WWII, routes began to be abandoned in favor of buses. Changing residential and commute patterns, and the ease of buses to adopt new routes, led to the abandonment of the Fifth Avenue streetcar tracks in mid-1947. The entire SDERy track system was abandoned in 1949 and converted to bus operation.