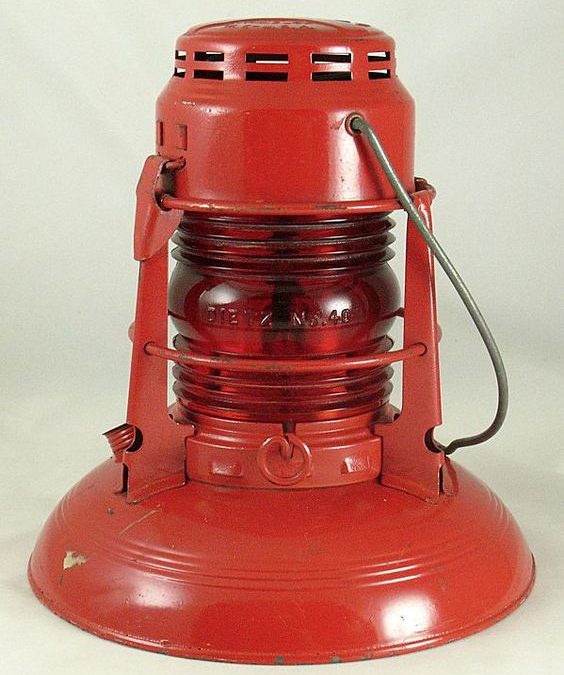 Finds in the field:

Even after years of archaeological fieldwork, it’s still possible to come across a new type of artifact. Makes it feel like your first survey again! This happened recently in Bay Park, in a light industrial area built up during WW2. While construction crews were excavating for a support wall-related a transit project, PanGIS archaeologist and SDCAS board member Doug Mengers uncovered a fluted and embossed fragment of curved red glass (Figure 1).

At first, the artifact appeared to be a portion of an electrical insulator, but red is not a usual color for those. Luckily, the fragment that remained had a product model number embossed (shout out to Helena, patron saint of new discoveries!). Further research on the embossing revealed it to be part of the lens to a Dietz #40 Traffic Gard Lantern, a kerosene-fueled lamp used primarily by construction crews to signal roadside work areas at night and caution drivers.

The evolution of traffic safety:

Prior to modern battery-powered yellow strobe lights commonly seen atop A-frame construction barricades, most nighttime construction was lit with kerosene barn lanterns, such as the Dietz Little Wizard No.1. These were designed to illuminate, not signal. They required extensive upkeep and attention to fuel usage.

Taking a cue from railroad signals, which used an optical lens to brighten the intensity of a smaller flame, in 1940 the W.C. Embury Company of Rochester, New York, introduced a lamp specifically for traffic control. The #40 Traffic Gard used a proprietary Fresnel globe like railroad lanterns, with a large font and sturdy frame. It could rest on its wide base or be hung using an attached hook (Figure 2).

The W.C. Embury Company was purchased by the R.E. Dietz Company of Syracuse, New York, in 1953, and continued production of the #40 under the Dietz name. A smooth globe was introduced sometime after 1956, and the lantern continued to be produced through the 1960s.

The #40 Traffic Gard appears to have been extremely successful, and it’s a wonder this archaeologist hasn’t come across one before. There does seem to be a healthy collector network out there, which may explain the lack of #40 Traffic Gard lanterns in the archaeological record. Thankfully, those collectors have also seen fit to collect (and share) much information on Embury, Dietz, and the lamps they manufactured.