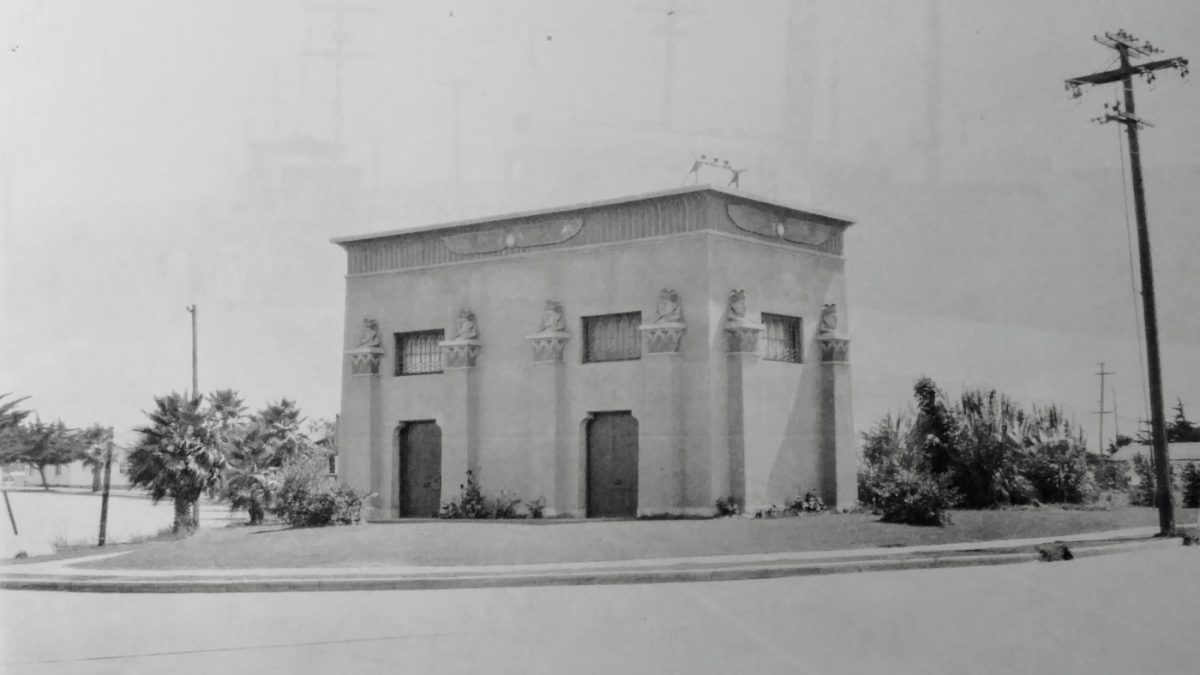 Egyptian Revival and the SDERy by Doug Mengers

As a Senior Archaeologist/Historian with PanGIS, Inc., a San Diego-based environmental consulting firm, many of the projects I consult on involve the evaluation of historic resources. The evaluation process includes research of the structure (building permits, architectural components) as well as its surroundings (historic maps, neighborhood histories). We then assess whether the resource meets criteria for listing on a historical register, including an evaluation of the property’s integrity – the ability of the resource to convey its historical significance. A recent project illuminated a brief period of San Diego’s history of which little remains, and involved Egyptian Revival architecture, the San Diego Electric Railway, and the oldest business in North Park.

As the San Diego Electric Railway (SDERy) neared its maximum extent in the early 1920s, stretching across the mesas and up the coast, more electricity was needed to power the system. To meet this need, three new electrical substations were constructed in 1923-24: in Ocean Beach, City Heights, and North Park. All three were built in an Art Deco version of the Egyptian revival architectural style, briefly popular after the discovery of King Tutankhamun’s tomb in 1922. The Ocean Beach Substation was later demolished, but those in City Heights and North Park still stand.

Prior to the arrival of the SDERy, the mesa northeast of today’s Balboa Park consisted mostly of scattered lemon groves and small farms. In 1907 a cut was made through the bluff between Park Blvd. and Florida Canyon, topped with the original redwood Georgia Street Bridge, and University Avenue was graded to the east. Trolley tracks were laid along the same route, reaching Boundary Street in 1909, Fairmount Avenue in 1912, and Euclid Avenue in 1916. With the trolleys came neighborhood development, primarily North Park, centered on 30th Street, and City Heights, around Fairmount. Both of these areas developed rapidly in the 1910s, and by the early 1920s, the main SDERy power station at Kettner and Broadway was unable to supply enough electricity for the trolleys.

The substation in North Park still stands, along an alley just west of 30th St between University Ave and Kansas St. It has been heavily modified over the decades, but the original structure is still apparent. Architectural revivals do not typically copy classical designs but are modern interpretations of them, using current materials and construction techniques combined with an aesthetic theme. Egyptian revival architecture in the United States during the 1920s often featured monumental construction, calling to mind the pyramids and temples of ancient Egypt, with flat roofs and few windows. The North Park substation is a massive, blocky structure, smoothly stuccoed, with thick walls tapering towards a flat roof. The outlines of two small windows, later covered, can be made out above the western doors.

After the San Diego Electric Railway ceased operation in 1949, many facilities were sold off. The North Park substation sat vacant for about two years and was then bought by Hayden Robertson, Sr., owner of Berger Hardware. Berger Hardware is the oldest continuously-operating business in North Park. It originally opened in 1912 on the southwest corner of 30th St & University Ave (currently Union Bank), among a group of adjacent businesses providing building supplies and home goods for the rapidly growing North Park neighborhood.

After buying the shuttered substation and lot, Robertson constructed a new Berger Hardware storefront facing 30th St. The back of the store connected to the former substation, which was converted to workshop and storage space. A later addition extended the original substation structure to south, though without the thick tapering walls.

Berger Hardware serves homeowners and contractors, specializing in decorative hardware, cabinetry, custom closets, and other remodeling needs. Their showroom is still located at 3792 30th Street in North Park. For more on the company’s history, see the About section on their website.

Another specialty of Berger Hardware is barn doors, which is appropriate since they inherited one from the North Park substation that forms the back of the business. What was formerly a sliding exterior door now connects the original substation to a later (1950s-60s) extension.

The hardware appears to be original, though the rope has (thankfully) been replaced, and the door is still operational after close to 90 years of use. The door itself is constructed of metal sheeting over wood planks. A maker’s mark is visible on the sheeting, though in reverse. The mark reads: WHEELING STEEL / CORPORATION / IC / 20 LBS / COP-R-LOY / THE DOOR STANDARD.

COP-R-LOY was a trademark of the Wheeling Steel Corporation of Wheeling, West Virginia, in business since the early 1890s. The company made various formed steel products over the years, including stove pipes, clothes dryers, corrugated roofing, and automobile gas tanks. COP-R-LOY was the name of Wheeling’s proprietary copper-alloyed sheet steel, trademarked in 1928. It was applied to sheet steel roofing, barn door cladding, and other construction materials, as well as consumer products such as frying pans and garbage cans. Below is a 1929 advertisement for Wheeling COP-R-LOY.

For more information on the history and development of North Park, see North Park: A San Diego Urban Village, 1896-1946 by Donald P. Covington (2007), available through the North Park Historical Society.